Taking Pride in My Insanity

Hey America! Fossil Fuel is not the answer. Even Nuclear Power is unnecessary. Let’s set aside the debate over whether or not global climate change is happening or if it caused by man. It does not matter. There are enough reasons to stop using fossil fuels without that.

The argument about the technology not being ready has been made since the 1970s. The technology is there now. We have the ability. Yes, batteries are still the weak point, but there are very promising possibilities there too (Tesla) (Hydrogen). The potential energy that is out there is astonishing. The power from the sun alone provides more than we need.

Many countries are making great headway towards completely eliminating the use of fossil fuels (Germany) (Austria) (China). If this is possible so quickly after starting down this road, why is America vowing only to reduce our output by a small percentage over the next several decades? Those in power are making this seem like it is an incredibly difficult goal to attain and is going to make a huge difference.

The only reason that this is challenging is because of the power that the existing structure has to prevent any change. Our current model is to the benefit of a few who will pay a lot of money to keep it the way it is.

What about the other objections people raise? One of the strangest to me is that the technology is not nice to look at. For one thing, what is more important? The future of the planet or the color of your roof? Another thing, the methods of getting fossil fuels are a lot less pretty. 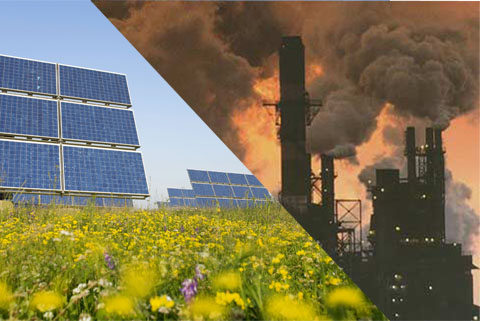 Ok, so you don’t want solar panels or wind turbines in your backyard and you are willing to pay for the line loss. There are other possibilities too.

Or you could just use your clear windows! There are many projects out there, big and small.

In fact keeping energy production closer to home can solve lots of problems. As far as I can tell the main reason that we are currently using large wind and solar farms rather than investing more in at-home systems is because the power companies still get their cut this way.

Ok, what about those job losses we hear so much about? Renewables create more jobs than it replaces.

A few more arguments that are worth discussing.

Ok, so this is more like a list of outside info than a real post, but seriously, the information is out there. I don’t need to repeat it.

Patriotism. I am a proud American, but I bow my head in shame for some things Americans do.

The most Patriotic things that we do are in support of those principles that make us proud to be Americans.

5)  Vote – In this country we have the ability to influence our government. This is the easiest way to do it. I understand that there are limits on our personal influence for many reasons, but if we don’t even participate in it, we are not only giving up that influence, but we are telling people that we don’t care enough.

4)  Agree to Disagree – This may be the most difficult thing on this list. In order to have a healthy discussion about anything, we must be open to hearing about others opinions. Even though we may be very emotionally attached to our own, hearing others is what helps us to work through any flaws in our thinking. If you are in it to win it, listening may help to understand enough to compromise or influence others.

3)  Petition – This is another very simple gesture that can have a great effect on policy. Voting on who is in office is only the first part of our civilian influence. Those is office want to return, and so they want to keep their voters happy. Let them know what you want them to do, either by writing them directly or signing petitions that others have created.

2)  Protest – We have a right to fight for what we believe in. Although the Patriot Act limits this,  we still are able to make a difference through these means. This can mean private corporations, or even, the government.

The least Patriotic things are about blind loyalty.

5)  Flag waving – This is not inherently unpatriotic, but it is if we are out of touch.

4)  Give up on Democracy – I fully understand that our democracy has limitations, and has evolved over the centuries for better and for worse. Our job is to make sure that it keeps getting better.

3)  Trying to Force Others to Agree With Us – The greatness of America lies in the multitude of varying opinions and backgrounds. No-one has the right to tell someone that their way is inferior. That applies to everything from freedom of religion to the ‘Spread of Democracy’. If we truly want to prove that our way is better, let us try to lead by example, not force.

2)  Creating, or Allowing the Creation of a Class System – Throughout history, all over the world there have been class systems. The people at the top were able to control the people on the bottom to varying degrees. Today we may not have an official system of nobility and citizenry, but we do have it. This is the most damaging thing to the functioning of democracy and the greatness of this country.

1)  Pledge of Allegiance – I feel a chill down my spine when I hear a classroom full of children reciting the Pledge of Allegiance. Children memorize it before they even know what the words mean. That said, I do support the principles of the pledge, ‘liberty and justice for all’. The problem is that it is just words. If you think about it, we pledge our allegiance to nothing but a piece of fabric. That fabric holds a lot of symbolism, but in reality is nothing more. We are also pledging our allegiance to the republic. We are vowing to help hold up not the liberty and justice part, but the republic that happens to have those. Before anyone recites this pledge, they need to fully understand what it means. I fully Pledge my Allegiance to this great nation – so long as liberty and justice prevail.

At first I thought this post would say something like, ‘Ok, the joke is up, it’s not funny anymore.” But it is way past that point. I am truly terrified about this. At first it was just as an idle ‘what if,’ but the polling numbers make this a real possibility.

A facebook page supporting Bernie Sanders posted a question, ‘What worries you about Donald Trump being president?’ I found that my answer was far too long for a response in the comments.

Entitlement – It started with Trump’s 1% attitude. He thinks that he got himself where he is today. As I have said before, I don’t really believe that is how capitalism works. Our economy does not get people where they belong based on work or ethics, but primarily on family wealth and/or unscrupulous behavior. This is shown with his ‘small $1 million dollar loan’. Little does he realize that this is more money than most Americans will even handle in their lifetime.

As someone who already benefits from the elaborate protections the wealthy have on their money, Trump is likely to keep those and create more. All of these protections are damaging for those who cannot take advantage of them. For every penny that they keep is a penny out of circulation. Each penny is another one that will not be paid to the hard-working employees to buy food. In the end, each penny they hoard is a penny they don’t have to steal a second time.

Cruel – The television show, The Apprentice, is known for Trump’s coldhearted treatment of the contestants. While one could hope this was just for sensationalism, it is precisely that sensation that propelled him to where he is today. It is that attitude that has earned him fans. Having anyone in charge who thinks that people are disposable is a recipe for disaster. I doubt the people who work for him are treated very well. And these people we see on the show have been mentored by him, sometimes for several weeks. Even that does not help him to show any sympathy. What can we expect him to feel for people he has never even seen?

Bigot – Trump has gained his thunder through cruelty in general, but now he is directing it. He knows that he needs certain individuals to support him, and is directing their existing fears and prejudices to his advantage. His hate speech is terrifying to me. We forget that Hitler did not round up everyone he disliked at once, he started small and gradually worked his way up as fewer and fewer groups were there to protect one another. This is one of the reasons that we must protect other people’s freedoms as well as our own. American history that I grew up learning was a consistent progression of gaining equality and rights for the disenfranchised, but within my lifetime we have gone back centuries when it comes to this progress. Trump is even more overt about it than Bush.

Followers – The most terrifying thing to me is not that there is someone in the world like this. I know they exist. The fact that he has power is frightening, but what scares me the most is that people follow him. He has supporters who believe the outrageous claims. He is working them up to a fever pitch, allowing people who were considered ‘fringe’ before for their radical views to come into the limelight. This is the Tea Party, but perhaps even more extreme. This is dangerous.